The aim of the Methodist Church in Bodmin is to make and grow disciples of Jesus Christ. The purpose of the church is to deploy its resources of people and finance effectively so that the mission of God may continue and flourish in the town and local area while upholding the doctrinal standards of the Methodist Church.

The Bodmin Methodist Church has adopted the Safeguarding policy of the Bodmin, Padstow and Wadebridge Methodist Circuit. To view a copy of the Quick Reference Guide click on the link below

The first significant date for Methodism in Bodmin is Monday 29 August 1743 when  John Wesley first came to Bodmin.  In 1804 the first purpose-built place of worship was constructed. On Thursday 7 May 1840 the Bodmin Wesleyan Centenary Chapel opened in Fore street. Centenary because it was built on the centenary of the Methodist Movement, founded in 1740. The old building being used for used for Sunday School, Day School, & hall for events. In 1842 Pool Street Chapel was built. Followed in 1851 by the Town Wall Chapel. The Centenary Chapel was much enlarged and refurbished in 1885. In 1886 an organ installed—built by John Sweetland of Bath; (later restored in 1926 and again in 1973).

Lady Huntingdon's Chapel (Fore Street) was built in 1870 but closed and was demolished in the 1960's; (it became Ford & Lock supermarket and later the Job Centre)

The 1932 Deed of Union saw three Bodmin Churches on the same plan i.e. Centenary—Pool Street—Town Wall but concentrating on Centenary.

In 1964 came a huge change the three congregations joined forces to form the Bodmin Methodist Church. In 1967 the interior of the Centenary was reconstructed with the Chapel upstairs and rooms below. In 1976 a rear extension was opened. In 1982 (Year of Disabled) a chairlift was installed.

A large legacy in 1984 was used for eradication of dry rot, installation of double-glazed windows, and  other resources, e.g. carpets, curtains, bibles. Also as a safety measure, the northwest staircase was removed, and later allowing a small upper room to be created. In 1992 the Bodmin Circuit was replaced by the formation of the large North Cornwall Circuit, itself replaced in the late 1990’s by the Bodmin , Padstow, Wadebridge Circuit.

By 2006 it became obvious that the 1840 building was too large and too expensive to maintain. So on 23rd March the last service took place and the site was subsequently sold. For the next 20 months the church was forced to use various premises in Bodmin for worship until a new site was found with the purchase of a former carpet shop in Fore Street, just a few doors down from the old chapel. On Sunday 16th March 2008 the first service was held in the new premises.Sunday 18th  May 2008 was the date for the Official Opening and Dedication.

Following several necessary years in consideration of the "Way Forward", the smooth transition into the beautifully refurbished building confirmed the thoughts of so many people that the hand of God was in this bold venture. Confidently, the whole of the congregation continued even more regular attendance at morning worship, enjoying the easier access and the up-to-date comfort of a modern set up. Many long established regular events took on a very marked new lease of life. Including 'Coffee' following the service, coffee mornings on most Saturdays, occasional light lunches, a mid-week Holy Communion service. Women's Fellowship and Ladies' Group, bible studies and a prayer group, table-top and book sales, with seasonal fairs and other occasions, continued to be popular. It must be recorded, also, that many and diverse groups hire the facilities, e.g. charities, Church of England Friends, a Camera Club; this is always with the blessing, and often help, of church members. It is also pleasing that the office space is used by Victim Support.

All this is so satisfying that, as the minister, the Revd. Peter Smith, advises, the officers of the church must actively resist the temptation to stand still. So, work undertaken to make appropriate changes to the function room upstairs is now complete; a kitchenette and toilets are included.

Our church, the Methodist people of Bodmin, is built on the rock. The on-going 'building' continues surely and steadily. 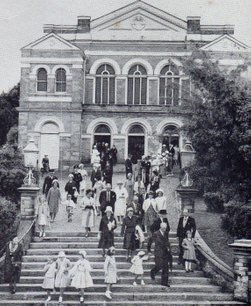 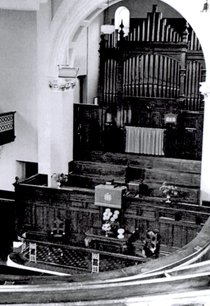 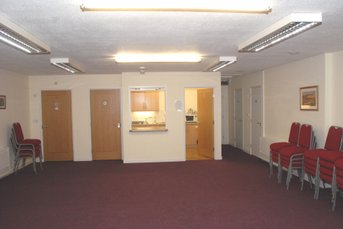 The upstairs room is available for hire at the rate of £25 per session (morning, afternoon, or evening) or £50 for the whole day.